Wonder what these cows are hidin

We hit the road early this morning after last night’s big storm. I was worried as our guide book had warned that the next 9 miles could be “sloggy” if wet and we must have gotten a couple of inches of rain that night. As we headed out the road was wet and a little muddy but I thought to myself, well this is not bad. I wondered what all the fuss was about. We rounded a turn and came upon a wall of cows. I had already begun a love hate relationship with cows on this trip. They are very, very messy animals, and not the sharpest creatures in nature’s shed. They refused to move and I pondered what they could be hiding?

They were hiding a SHMUD highway!

Finally refusing to move, I shouted some obscenities and they parted. I causiouly proceeded in case they decided to stampede over me. Then I saw it, a mud highway that went for miles. Not just any mud, but mud mixed with cow poo! Denise calls it SHMUD!

It was the nastiest, most sticky mud I have encountered. It stuck to everything it touched and completely gummed up our bikes to where they would no longer roll. It was so thick that we could not even push our bike through it. Finally we ended up carrying them.

I really have no way to describe the effort it took Denise and I to get through other than it took us 6 hours to go 9 miles up up and up mud mud and more mud. To top it all off, we had to climb up 1000 feet. It was so sticky that our shoes weighed at least 10 pounds and were the size of snowshoes. Finally we tried blazing a trail through the chapparell, well this worked for a little bit, until all the brush stuck to the mud, then we ended up with a nice adobe straw material. Nice for building a home, but not so hot for wheels and shoes.

Every time we had gone over the last hill there was another. I swear if there had been one more hill. I would have left everything and hiked to the nearest road and hitch hiked back to San Diego. How we pulled it off I have no idea. Denise is my hero, what a trooper!

Finally completely exhausted at the top, we did find a stream and spent an hour cleaning the bikes so they would work again. Now it was 3:30 we were spent and starving from all the extra work. We had no food and were 35 miles to town. We had let our food reserves get low, because today was supposed to be an “easy day” that ended up in a good town to resupply.
We carefully looked at the map and found that fortunately the next 30 miles were down hill, as we had climbed to 7700 feet. With no food we really did not have any options but to push on. 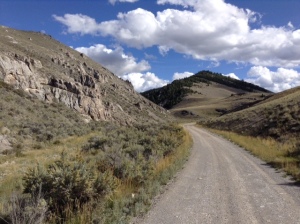 We pushed on and it was also some of the most spectacular riding yet. I raced a cloud shadow doing 25 mph down a prairie hill for about 3 miles. Then we entered a narrow box canyon just like the ones Indians used to ambush settlers in on the movies. Then we entered a canyon and followed right next to a raging stream going down hill. It was EPIC Mt biking. Thank goodness because we really needed the spiritual lift.

After the 30 miles of downhill we ended up by the highway. Bob, who had smartly left us the day before was supposed to be in Lima, our destination. Fortuneatly we had cell service so we were able to call and confirm there was food and a nice warm hotel bed to crash on. Even though these last 5 miles were flat, we limped into town, and once again, ate everything we saw. More than a few beers were also consumed as we told our tale to Bob, assuring him, he had dodged a real muddy nightmare.