We woke up to quite a change in camp (see day 7),  with the new Russians arriving in the middle of night, several new tents had “popped up”. We now had a full-blown Russian tent city. It was very cold, as is usual in the morning, and as soon as we popped out of our tent shivering, the new Russians were excited to talk and hear our story. They were a very nice couple with four kids with a lot of questions and interest in our travels. We were anxious to roll as we would be leaving Canada and entering the US, so we had to cut the tales a little short and move on. The thing we were most excited about being back in the US was to get our cell service back. Being the frugal bikers we are, we did not roam while in Canada.

Most of today was on highway leading to the border. As we got close we could see the crossing with a line of cars about 15 deep. We were told we could cut the line and get to the front being on bikes, but I wanted to do my good will for cyclists so we waited in line with the rest of the vehicles. It didn’t take but about 20 minutes to get our turn. It was fun pulling up to the inspector on a bike. Sadly he had his typical, don’t like my job attitude, and didn’t appreciate any of my jokes about not having a passport and that I was from Guatemala seeking political asylum. Fortunately I suddenly “found” my passport before he could draw his gun. 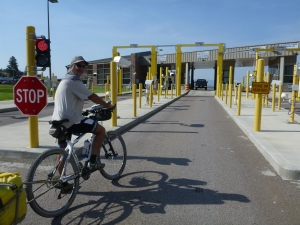 It was very interesting being back in the US. As soon as we crossed the border, the amount of road traffic increased 10 fold, while the courtesy of the drivers decreased by 100%. Everyone was in a hurry and they seemed to not like cyclists sharing their road. Quite different from Canada. This was a theme that would continue through most of Montana. For some reason, Montana Rednecks do not like cyclists. Dont take me wrong, being a Redneck is in no way a negative thing. It is just an easy way for me to give a stereo typical discription of a life style and those that drive big pick ups.

However being back in the US did increase the availability of goods and services. We hit a hardware store within 5 miles of the border and I was able to buy and add an American Flag to the pole on the back of BOB (the name of my trailer, stands for Beast of Burden). I was hoping that it was the lone Canadian flag I had on BOB’s pole that making the Rednecks ornery towards us, but sadly adding the American flag did not increase their politeness towards us. Still I am proud to be an American and wanted to add it. It also works well for traffic visibility having the good old Red, White and Blue waving behind. When we ride on the road, I generally bring up the rear hoping that the flags will help traffic see us. Also I feel I am helping to protect Denise, if they are going to hit someone, I would rather it be me.

Today was a short day, only 35 miles, but we had a head wind most of the day. We were more out in the open country than in Canada so it drained us quick. Toward the end we were very tired. Then about two miles from camp, I saw a sign advertising a Brewery with wood fired pizza. 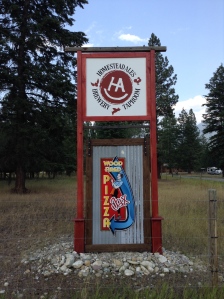 Denise asked if I saw it and I told her it had to be a mirage because there was no way there would be a brewery out here in the middle of no where, so we pedaled on. Turns out the camp was 3 miles off the route and we had to climb a big hill and then go down a steep hill dropping back down to Grave Creek. It was a very isolated camp right next to the creek. As we were setting up camp, a couple that was motorcycle camping stopped by and asked if we were going to the brewery for dinner. I told them we were too tired to ride the 4 miles back, but they kept raving about the pizza.

After setting up camp and staring at uncooked packets of freeze-dried food, we gave in and hiked back to the brewery. The walking actually felt good as we had our butts were vertical instead of horizontal. On the way we passed a field with about 25 White Tail Deer. We stopped and took photos and pushed on, motivated by beer. Turns out that H.A. Brewery was quite the happening place. I don’t know where all the people came from but they were coming and going, during our entire stay.

Best pizza we have ever had, it was no mirage!

The pizza and the beer was amazing! Not only that we had internet access for the first time in about 3 days so we were able to catch up with family and friends. The pizza was so filling that not even two starving cyclist could finish it, so we had some to go. The walk back was much more enjoyable with a full stomach and a beer buzz. Saw more deer and the biggist dog I have ever seen. Thank goodness he was friendly.

We were camped in what I saw as prime bear country, down by the river, with berries. Sadly that night there was still a fair amount of wind. I heard every rustle which I was sure was a bear checking out our camp. Fortunaely this camp did have a metal bear box for us to stash all our food in. Still being the head of bear security on this trip, I took my duty seriously and did not sleep much keeping the can of bear spray very near by in the tent. Finally dawn revealed all was clear, even though it was a very, very cold morning. 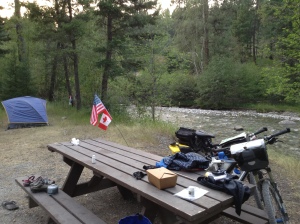