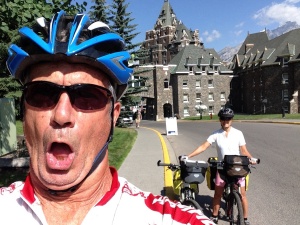 Without boring everyone on all the details, a lot of research and preparation went into just getting us to the start of the trail. That being said, with everything in life there are going to be some surprises. Who knew our youth hostel private room offered barely enough room for us and our gear to coexist.

It took a lot more time than we imagined in getting everything put back together. We had spent several days taking everything apart and carefully packing everything into 3 cardboard bike boxes, and a box for the trailer. Really don’t know why I expected everything to go together much faster. Sadly we only budgeted one extra day in Banff to prepare. It really was barely enough time so we did not have a lot of time to enjoy Banff before heading off. It is truly a beautiful and magical place, but as such, there were a lot of tourists.

Up to the final hour of needed departure we were still trying to figure out how to put everything we thought we needed onto our bikes and “Bob” our bike trailer that I would be pulling. Finally it became clear that we could just not bring it all, so off Denise went to mail the extra ahead to a post office on our route. Finally it was time to leave or we would not make our first campsite before dark. Well guess what? I am sure you have heard stories about people building boats in their garages and not being able to get them out when finished. Well, two assembled fully loaded bikes, a fully loaded trailer, and two people in an extremely small room made for a very interesting Tetris puzzle. It took us 30 minutes just to get everything out of the room!

Finally out the front door, we were slammed with the reality that Denise’s overloaded bike and my overloaded trailer did not behave anything like our test trip in the Laguna’s. The bikes where so unstable we were actually afraid to pull out of the parking lot much less head out on a 2700 mile adventure. I hid my concern from Denise as much as possible and knew this could be the end before we even started, as we must be able to control our bikes. We looked at each other and decided to just go for it. Pulling out into the street I could tell it was going to be interesting trying to keep tailer  “Bob” from being boss of my bike. It was totally like learning to ride a bike for the first time again.

The good news was we had about a mile to road before we started out on the trail behind the fancy Fairmont Springs Hotel. As we passed thru their parking lot I almost ran over several people out of control and got some very mean looks. I saw Denise wrestling her beast (now known as BUCK) also with two over weighted saddle bags trying to take her anyway but straight! We stopped for a picture and tried to regroup. Secretly I had my doubts, and if Denise had said she didn’t think she could pull it off, I would have agreed and we would have come up with a plan “B”

Surprisingly,  I came up with, “I think we just need to readjust the loads a little lower to the ground, lets just try to get to the first campsite and we will deal with it there”. Good news was, she bought it, and down the trail we went. Luckily there was no one else on the trail for us to maim. However at mile one we saw the largest male Elk I have ever seen, standing in the middle of the trail. We managed to stop before hitting him and I got to count his rack as 14 points. Seeing the Elk brought us back to reality that all the trouble it took to get to this point, was really worth it. So we pedaled on.

One thought on “Hopefully, the first step is the hardest”